Beginner’s Guide to the TCPA

Origin of the TCPA

Since 1934, the FCC has become much more wide-reaching. The Telephone Consumer Protection Act (TCPA) of 1991 amended the original Communications Act to place prohibitions on calling and texting, especially when using automated technology.

What is the Telephone Consumer Protection Act?

The TCPA was signed into law in 1991 and became one of two key federal rules (the other being the FTC’s Telemarketing Sales Rule) covering telephone communications in the United States. The TCPA is a law that prohibits, among other things, telemarketers, banks, debt collectors, and other companies from using an automatic telephone dialing system (ATDS) to call consumers on a cell phone without their consent. The intended purpose of the TCPA was to ban all automated or prerecorded calls except when the receiving party consents to receiving the call or when the call is made for emergency purposes. 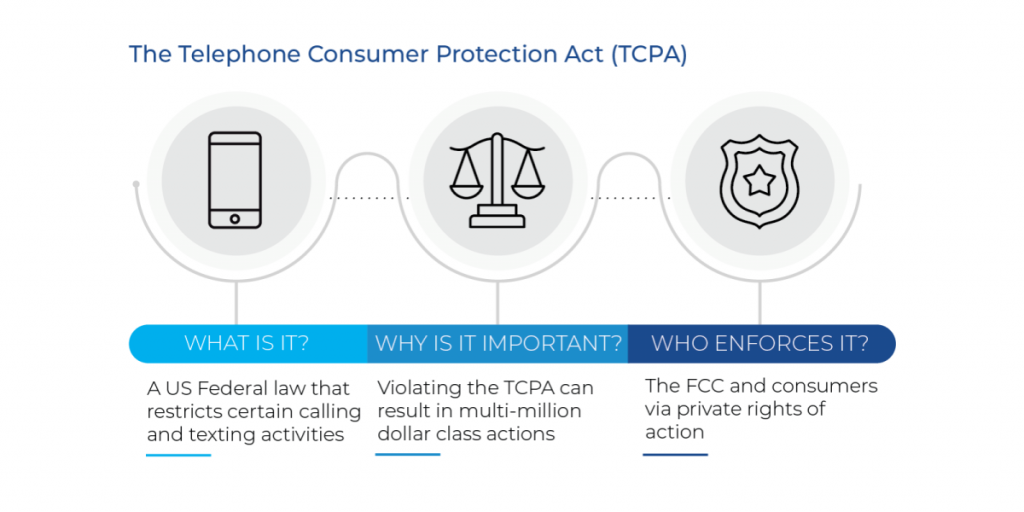 Components of the TCPA

What is an ATDS?

An Automatic Telephone Dialing System (ATDS), widely known as an “autodialer”, is generally a dialing system that has the capacity to dial or text numbers without human intervention. Note that the term “capacity” means that, in many US Districts, it doesn’t matter if a company uses this mode on an autodialer. Rather, if the autodialer has the capacity to dial without human intervention, then all calls (even 1-to-1 calls) placed from that system are subject to ATDS rules – namely, express written consent.

Obtaining Consent to Utilize an ATDS

When utilizing an ATDS to place marketing calls/texts to cellphones or send prerecorded marketing messages to any phone, companies must obtain prior express written consent from consumers before contacting them. Simply obtaining a number from customers should not be confused with consent – companies still must ask for their permission before using an autodialer for sales purposes. Any type of written consent disclosure should be clear and conspicuous and include the following requirements:

In addition to autodialer rules, there are other rules to follow when making a sales call outlined in the TCPA:

What Exemptions Can Be Claimed for the National DNC Registry?

The TCPA provides a Safe Harbor that is similar to the Federal Trade Commission’s (FTC) Telemarketing Sales Rule’s Safe Harbor, but varies slightly. It outlines that an entity making telephone solicitations will not be liable for violating the TCPA if they can demonstrate that the violation is the result of an error and that the violation is not part of a routine practice. In order to claim a Safe Harbor, the following standards must be met:

Companies using technology to dial consumers with an autodialer in modes not requiring human intervention must follow call abandonment protocol. An abandoned call occurs if a live consumer answers a telemarketer’s call, and the telemarketer does not connect the call to a live agent within two seconds of the consumer’s completed greeting. The Abandoned Call Safe Harbor protects a telemarketer that violates this rule if it:

Why is TCPA compliance important?

The greatest risk for companies subject to the TCPA is class actions. TCPA class actions often result in multi-million dollar settlements. The TCPA provides consumers with a private right of action, which has resulted in thousands of lawsuits against companies related to non-compliant calls and text messages.

Both the Federal Communication Commission (FCC) and state Attorneys General can enforce the TCPA, and may bring lawsuits in federal court for actual damages or fines of $500, whichever is greater. If a company knowingly violated the law, that amount can be tripled to $1,500 per willful violation.

It’s important to keep in mind the possibility of PR damage to your organization. The effects of negative publicity can be worse for a company long-term than the fine. Professional plaintiffs tend to target companies with a history of TCPA cases.

Please reach out to us at connect@compliancepoint.com if you have any questions about this topic or how CompliancePoint can assist your organization with managing your marketing compliance.

Let us help you identify any information security risks or compliance gaps that may be threatening your business or its valued data assets. Businesses in every industry face scrutiny for how they handle sensitive data including customer and prospect information.